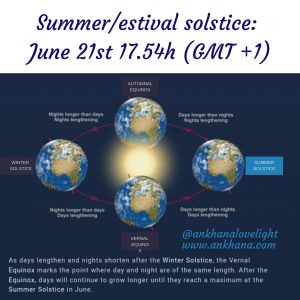 There are 4 points in time that we celebrate if we follow the movement of the sun: 2 solstices (1 for summer, 1 for winter) and 2 equinoxes (1 for spring, 1 for autumn). Depending on if you live in the northern hemisphere or southern hemisphere you will be celebrating one or the other. When we celebrated our spring equinox in the north, the south was celebrating their autumn equinox. Just like we now celebrate our summer solstice, while the south will celebrate their winter solstice!

In some cultures the summer solstice is seen as the middle of summer and referred to as “midsummer”, in other places it’s seen as the beginning of summer.

After holding my first equinox ceremony in March this year, I now get to hold my first solstice ceremony! Again I get to do this at the beautiful Casa Solara in Ibiza, but this time it will be outside under the sun until the sun sets.

Read more about using the 4 elements / 4 directions in a ceremony.