Last year around this time I brought my friend and spiritual teacher Solara An-Ra to the airport and on our way there we were talking about her Egypt trip that she was organising. I ask if there were still spots left on the trip, on which she answered: “No, it’s fully booked now. Why? Did you wanted to join?”. Well… I wanted to join, but I didn’t have the money for it, so I kinda gave up. Solara was very clear: “It’s too late now, everything is booked, even the internal flights. It’s not possible to join anymore.”. I dropped her off at the airport, we said goodbye and I drove home. On my way home I got a very strange feeling. I felt I really missed out on being on this trip to Egypt. It was so strong that I send Solara a voice message while I was driving (which I normally never do!) about my feeling, but that I understood it was too late now. 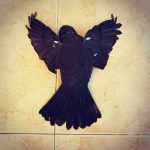 Coming back at Casa Solara where I was staying for the winter, I found a dead bird in front of the entrance to the house. A dead bird, with the wings spread open. No blood, no sign of a fight with a cat, and if the bird would have flown against the window, it wouldn’t have ended up here and especially not in this position. This position, with the wings spread, reminded me of Isis! Who is an Egyptian goddess, I knew that, but I didn’t know anything else about Egypt or their gods back then. I had to take a picture and send it to Solara, who by now was travelling, so she probably wouldn’t see my message any time soon. I didn’t mention anything about Isis, I just send the picture with a message like “look what I found when I got home!”.

That afternoon I received more signs about Egypt, through Facebook and even through a dating app! Egypt seemed to be everywhere all of the sudden, but I knew I was too late.

The next day we were meeting up with our weekly channeling group from the island. We were all recently trained by Solara to open to channel and we were practising together. Everyone would put in a question, the whole group would tune in and then who ever received a message would channel. The message could be for themself, or for others, just what came through in the moment. I asked if I needed to go to Egypt, as I was getting all these signs, but I knew there was no option of joining the trip with Solara anymore. The answer that came was VERY clear. It was the strongest energy that ever came through me so far, so strong it was quite scary and difficult to hold for my body. My whole body was shaking and a very powerful, masculine energy came through that spoke very intense and strong: I needed to be there on this specific trip, and I would find a way to be there.

Again I decided to share it with Solara, I sent her the recording of my channeling and asked her what she thought. The next day her reply came, the bird reminded her of Isis and she thought I was channeling an Egyptian frequency. She told me to ask Itzak to ask his guides when he would be back, and if they’d say I had to join, they would make it happen. Itzak is Casa Solara’s chef, who also lives there and who is an amazing channel. He supports Solara on a lot of her courses and they were organising this Egypt trip together. Itzak came home from his holiday that week and promised me to ask his guides. When I send him a message a few days later if he had asked his guides, his response was: “Yes and they said: ‘Yes… you were on the list from the beginning’.” So I was allowed to join, they would make it work!

I shared all of this with my parents and they were so sweet to help me with the finances, so I could go!! Lots of special things happened before the trip, intense channelings, beautiful messages and a last minute surprise. But I’ll save that for another time!

Now I just like to share that I’ll be going back to Egypt in 2019, with my own group! Egypt is calling me again, very strongly and I’ve received guidance about taking my own group. As I have a very strong connection to Isis, this trip will mainly focus around her. It will be a small group with limited spaces, so let me know if you want to be part of it, then I’ll put you on the list (with no obligations of course!). I’ll dive into it deeper over the coming weeks and will let you know more about this trip as soon as I know. For now I just want to share about this upcoming trip and call in all Isis-sisters that feel the connection to be part of this magical journey together!

PS: for now I have the feeling it will be end of March/beginning of April, but I’ll follow the guidance I receive in planning this trip!

This site uses Akismet to reduce spam. Learn how your comment data is processed.